Well its getting to the back end of the season however for me there is one mega event and that is the weekend at Angouleme. This is a Porsche 911 which is a great car, although I was not so lucky with my second one, so it is unlikely that I will be blessed by a third one, but you never know, and I live in hopes. 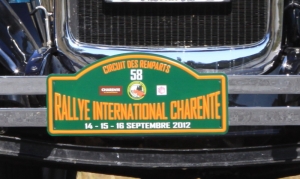 I have seen a lot of wonderful cars in the last two days. We went to Angouleme on Friday and saw  had a pleasant day wandering around and taking all sorts of photos, some of which were of cars but others of 3D wall paintings or churches or restaurants, in one of which we had lunch.

On Saturday we went to Dirac which is a small village about 10Km  from Angouleme and on the route of the Rallye. In the space of 2 hours about 300 cars passed through. Fantastic! What every schoolboy dreams of! we are all schoolboys when it comes to cars no matter how old we are on paper.

My daughter once asked me what one thing I would have if I were so rich so that I could have whatever I wanted regardless of cost. She would have a heated swimming pool with someone to look after it permanently.  I would have one of those wooden garages that you see advertised in country life magazines and it would have seven bays-yes seven- and in each bay would be a different car, one for each day of the week. They would all be sports cars and largely from the 50s and 60s which was when I was a schoo boy and which was also what a lot of people would see as the golden age of sports cars..

So here is my hit list. Not necessarily the most expensive, exotic or fast, really just what I would have loved to have had when I was 19. ( I had an Austin of England)

The car I most admired at the time was a Spitfire, though now I would demote that to Wednesday’s car or even Thursday’s. Number one now would be an Austin Healey 3000. There were several on the rally.  Number two perhaps a Daimler Dart- there was one of these in the rally. The MGA is in the mix. I was never so keen on the MGB. I would have a TR6 ( we did have one of those just after we were married. We previously had a Frogeyed Sprite). My last two would be a Porsche 911 but a very early one and then finally a Jaguar but not an E type- probably an SS.

Every so often I would  sell one car and get something different so I could get a Sunbeam Tiger or a Citroen  and thus I could experience all the lovely cars we saw on Saturday and some we did not. Dreams Dreams Dreams

On the second weekend of September it is the Circuit des Remparts in Angouleme. It is on Friday 14th, Saturday15th and Sunday16th of September 2012. END_OF_DOCUMENT_TOKEN_TO_BE_REPLACED